Teal organization is the future?

What is a Teal organization? In 2014, Frederic Laloux released a book entitled “Reinventing Organizations“, which also introduced the term Teal Organization. Both strongly resonated mainly with the agile world. Among other things, the book named “evolutionary” levels of ability to organize. So where are we probably headed and what will the organizations look like in the near future? Organization is what actually sets us apart from animals. We are able to communicate and collaborate… so how who and at different levels of course :).

In his book, Frederic Laloux maps the development of human society and its organizational models over time. It is interesting that in fact all the “development” stages mapped by Frederic can be found even today. Historically, however, this was not the case. “Higher” forms came gradually and were usually related to or perhaps partially caused by stormy societal changes.

There are five defined stages of development in the book and they are assigned color codes that should evoke the colors of the rainbow. So far, the list ends with the color “teal”, which is a specific shade of blue-green color derived from the color of a duck’s feathers. So there is room for further development, better (?) than the Teal organization. Which is wise from Frederic.

From Red to Teal organization 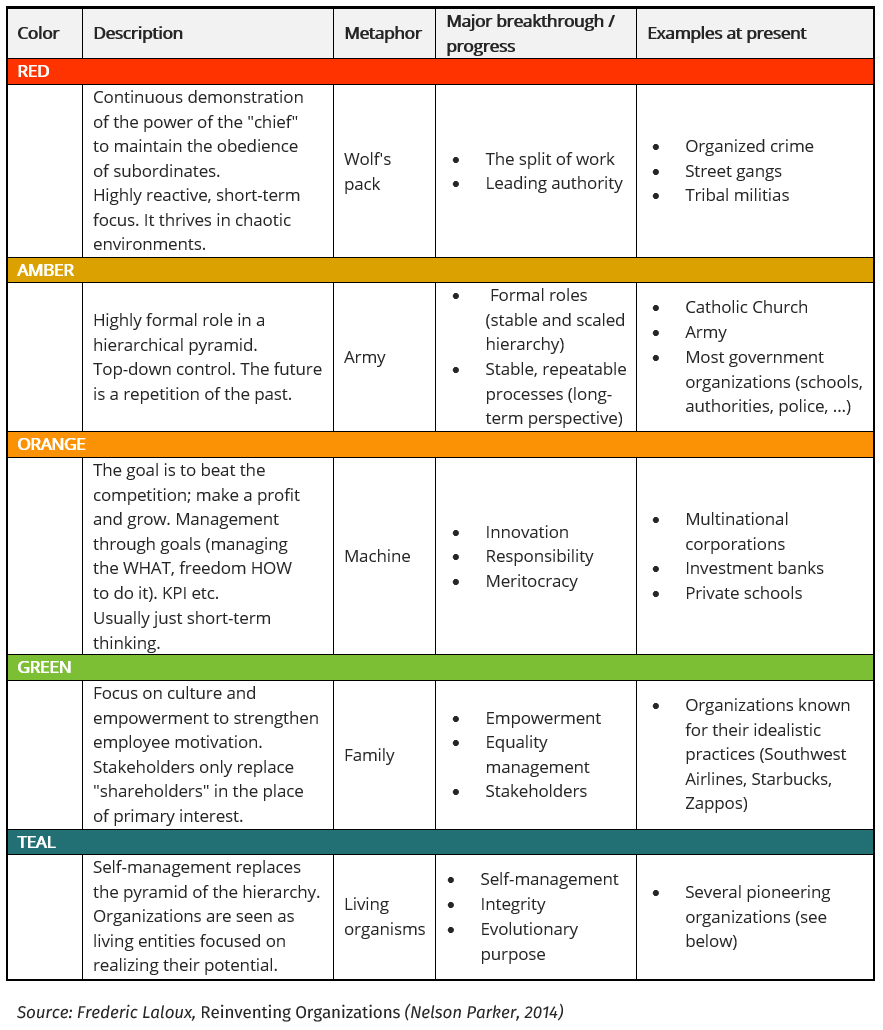 The first named type of human arrangement is RED. The model was created many thousands of years in the past. It lies in the dominance of the “strongest”, who maintains the obedience of subordinates by force. It is the time of troops, tribes and chiefs, the Stone Age. The main breakthrough of this arrangement was a certain division of labor, ie role, and central coordination by the leading authority. Several dozen to a maximum of a hundred people were organized in this way. Higher numbers were already quite impossible to coordinate in this way, and larger groups did not occur at this time.

In today’s world, we can find this arrangement in street gangs, tribal militias, etc. In general, especially in groups balancing on the edge of the law (or far behind it).

Next in line is AMBER (amber). As the development of human society progressed, civilization arose in several parts of the world, de facto independently. Thus, from the original tribes and gangs, complex systems based on formal roles and stable, repeatable processes began to emerge in the given localities. These innovations enabled the building of armies of tens of thousands of organized men (as opposed to a few hundred unorganized warriors). It enabled also the construction of many thousands of kilometers of roads, pyramids and other monuments.

Key to this arrangement are strongly formal roles in a clearly defined top-down management pyramid. The system as such is stable, it does not change. The future repeats the past. Because so he established it and said Zarathustra, Pharaoh, Caesar, God (many or one), …, in short, the anointed head. Whoever opposed the “natural” order of things was punished, silenced, declared a heretic, etc. The inheritance of roles and tasks performed is also common for these systems. The father was, like the grandfather, a second-class official, I am a second-class official, my son will … guess three times;). Mostly the office passed to the firstborn son, the others went on to make a career elsewhere (to a convent, to the army, etc.).

Where is the hook?

It should be noted that such civilizations have accomplished many and prospered very well… as long as they have had stable conditions. Which in some cases took thousands of years, in others at least hundreds. Certain small changes still managed to absorb, but more significant changes in the environment usually meant the demise of the civilization (Egypt clashed with ancient civilizations and Christianity, the Maya apparently paid for a long period of drought, Rome succumbed to mass barbarian migration, China destroyed by European merchant sailors,…) .

Today, there are clear signs of Amber organization, such as traditional churches, offices, public schools, etc. (Surely you have met this type of organizational arrangement, or rather clashed :)).

The ORANGE (orange) organization was established during the Renaissance, respectively with the emergence of banks and capitalism.

You did not have to inherit the title and fullness to be rich. Merchants from Genoa or bankers from Florence or even artisans from Lucca became very wealthy and gradually emerged from the influence of the nobility and bishops. There were even self-governing units, townships over which the then monarchy and the church did not have much influence. You could have “worked out”. Concepts such as innovation, responsibility, meritocracy came into being – rewards and functions were divided according to abilities – which could be measured by performance indicators (KPI was born).

This way of thinking was usually focused on short-term profit and defeat of the competition – the first-rate business logic. In this type of arrangement, organization is deterministically viewed as a machine. Everything can be “scientifically engineered” to analyze and describe processes in the sense that if A, then B. So if we cleverly design the processes, everything will work very well. The championship was achieved in this respect during the industrial revolution, which was actually made possible by this model of thinking (textile production in Manchester, etc., up to Mr. Ford or Mr. Bata).

Today, this way of thinking is still “at home” in various multinational corporations, manufacturing companies and elsewhere. It is probably the most common organization of companies today. Although the functions and titles are no longer hereditary (with the exception of the descendants of Ferdinand Porsche’s descendants) and there is a gradual development, it is still a system with a tendency to stability. Respectively, changes are difficult to make and usually take a long time … which is no longer possible to afford.

Around the seventies of the twentieth century, the idea began to emerge that humans were probably not machines, but living organisms. And that they don’t work completely like that, if A, then B (sometimes, strangely, they just don’t want to or something else is wrong…). Their behavior is more complex. Wages and reasonably demanding KPIs are not enough to motivate. The GREEN type of organization was born.

The management of some companies began to try to treat people as people, and not as easily replaceable resources. The processes of transferring responsibility and decision-making to lower levels of the organizational structure began, and these became increasingly flatter. With a clear intention – to be able to change faster and adapt to the environment, the market. Also have a positive effect on your surroundings, be perceived as a responsible organization – which is also related to the expansion and speed of information dissemination. In 1920, your company couldn’t be destroyed by a TV report … today?

A typical example is the story of Southwest Airlines, whose management during the corporate crisis came up with the strategy that the key to corporate success is satisfied and motivated employees (Simon Sinek writes nicely about this in the book “Start with why“). Other “green” examples are Zappos or Starbucks, which are also focused on the best possible corporate culture.

Despite the fact that “green” organizations are strongly focused on corporate culture, motivation, egalitarian management, etc., they are still basically classically organized organizations.

The TEAL organization is different. Teal organizations began to appear sometime after 2000, and their numbers are gradually increasing. The common denominator is a decentralized organizational structure based on a network of small, self-organized teams. The organization then behaves like a living organism, adapts to change and grows (analogous to natural evolution – the species that best adapts to changed conditions survives).

The task of management in a teal arrangement is no longer to command and control. The task is to create an environment for the creation and development of self-organized teams, to define a vision and a common, unifying purpose (otherwise, of course, it will fall apart!).

Examples of teal arrangements are from many different disciplines. The manufacturer of ketchups and sauces Morning Star (400 to 2,500 employees depending on the season), Patagonia (manufacturer of outdoor equipment with about 1,300 employees or Buurtzorg, a Dutch medical non-profit organization, is often mentioned. So not exclusively small IT startups function as Teal organizations!

Buurtzog – An example of the success of a Teal organization

The story of Buurtzog is especially interesting. In this case, it is home care provided to long-term patients in their place of residence. Until the early 1990s, the system operated on the basis of autonomous sisters who had their own district and took care of it (ie the de facto Amber arrangement). They knew their patients, they knew them, they had coffee together sometimes, chatted, etc.

Then came the time of government cuts and the system was privatized. Commercial providers came with set KPIs of the type of 2.5 minutes for changing bed linen, 15 minutes for a bath, etc. For the sake of efficiency, the staff exchanged and rotated in various ways. So four different people came to see her 80-year-old grandmother in a week, whom she had never seen and who did not even have time to say hello, let alone establish a closer relationship. So we are in the Orange arrangement.

The result was a deterioration in perhaps all conceivable parameters of the care provided – the time for which clients were ill, the number of their additional hospital admissions, the length of their stay in hospitals, etc. Which, among other things, cost the state considerable resources.

And Jos de Blok came to this in 2006, who had 10 years of experience in the system as a nurse and later as a manager. And he started doing things differently. He founded Buurtzorg with four sisters (he had 9,000 in eight years) on the principle of self-directed small teams – the Teal organization. A small group (10 to 12 nurses) simply has their own area (approximately 50 patients) and determines for themselves how they will provide care, how shifts will be, etc. Their main focus is not to be as economical as possible, but to help their patients live as best as possible and what return to normal life the fastest.

It was subsequently analyzed that where Buurtzorg operates (approximately 70% of the market), the number of hours of care needed has been reduced by 40% and savings in healthcare spending by $ 2,000,000 per year… as all conceivable indicators have skyrocketed.

So how will it be?

Self-organization, small teams, a decentralized organizational structure is not just the invention of Frederic Laloux and his Teal organization. Other important books and schools of thought draw attention to similar elements, such as management 3.0, and overall Agile is full of it (and far from not only in IT, as can be seen from the examples above).

Certainly we will have changes in this direction, because the present is complex, dynamic and variable, which will only intensify in the future. Green will probably be the bare minimum for survival … otherwise no one will be able to work for you; You will need to be able to adapt agilely. And it will probably go best in the form of a teal organization… until something even better is created 😉.

Note: the article, among others (mentioned books), drew from the source: https://www.strategy-business.com/article/00344?gko=10921

CYNEFIN framework will help determine when to apply agile