“What is Motivation 3.0? What? What’s the nonsense that a higher reward means a lower performance?”, You’re probably asking yourself. However, at least in most cases, this is, perhaps surprisingly, the case. These are the so-called hidden costs of rewards, which are very often very devastating. Specifically, these are rewards awarded in the style of “if … then”, ie the basis of motivation, ideas about economics and business in the second half of the 20th century. And to this day it is the reality in a large part of companies (see, for example, our article here).

Where did the carrot and stick come from (reward vs. punishment)

In very ancient history, people were driven only by their instincts and the need to survive. Dan Pink in his book DRIVE calls this paradigm as the Motivation System 1.0. At that time, we were not very different from other species with which we share the planet. Over time, however, as humanity, we have developed more complex social models, more communities than family groups and gangs. So the Motivation 2.0 system was born, the core of which is that in addition to the need to survive, people are driven by the need to avoid punishment or seek reward. Carrot and stick.

Motivation 2.0 has proven to be very successful. It gave birth to ancient civilizations, survived the Middle Ages and was also the engine of the industrial revolution. Until the 1950s, no one questioned this principle. And even when some behavioral psychologists began to warn that it was likely to be a little more complicated, their thoughts weren’t very successful. Why? Probably because in that context the carrot and stick system was still so effective that there was no need to change.

It is worth noting that the given principle of reward / punishment works quite well for algorithmic tasks. For example, clearly defined sets of small tasks with a clearly defined result. Which usually, hand on heart, is not a very interesting and stimulating activity. This is, for example, work at the line, but also, for example, simple official tasks, accounting, etc.

Why change it to Motivation 3.0?

The world has changed. At least the “western” one. The above-mentioned algorithmic tasks are declining. They are either moved to developing countries (India, Bangladesh, …) or replaced by robots, whether physical or software. Today, the SW will generate a contract for you, solve all the tasks for printing leaflets, etc. People are more likely to want so-called heuristic tasks, in which the procedure is not clear and often the result, and therefore a considerable degree of creativity is needed. And this is precisely the problem of the carrot and stick system, which suppresses creativity quite effectively and at the same time very often creates various negative side effects. According to Dan Pink, this requires an upgrade to the Motivation 3.0 system.

Since the aforementioned 1950s, various experiments have been carried out with generally the same results. One of the best known and also most frequently repeated (and each time with a similar result, even in different parts of the world) is the experiment with a candle (authored by psychologist Karl Duncker). In the first version only as a research of human ingenuity and overcoming functional fixation. The attempt is to give a group of people a candle, matches and a box of pushpins. The task is to use the received items to attach the candle to a wooden wall so that the wax does not drip on the table (or on the floor). Which is just a heuristic type of activity. It is not a clear procedure, a solution … the group has to come up with it.

Most groups first try to either pin the candle with pushpins or heat it up and stick it to the wall with wax. None of these solutions work. It is only after five to ten minutes that most groups overcome the mentioned “functional fixation”, dump the pushpins from the box, attach the box to the wall and use it as a base for a candle. 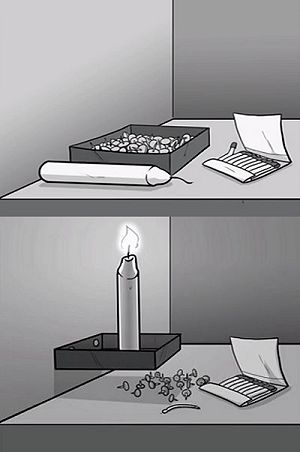 Sam Glucksberk “improved” this attempt by randomly dividing people into two parallel groups. The first group was told that time would be measured only to determine the average time to solve the task. He offered the second group that if he was among the 25% fastest, everyone would get $ 5 (fifty years ago a pretty interesting amount in a few minutes of effort). If the second group was the fastest, everyone would get $ 20!

According to the paradigm experienced at the time, this was to be clear and groups “motivated” by the reward were to be faster. But the exact opposite happened. And with many groups and repetitions in different parts of the world. Groups that were promised a reward were on average 3.5 minutes slower than groups without a reward … 3.5 minutes on a task with a normal duration of 5 to 10 minutes!

Further evidence of the need for Motivation 3.0

In another experiment, participants (87 people) were randomly divided into three groups. Each was to perform the same set of different tasks – throwing the ball at the goal, solving puzzles, remembering number series, etc. The first group was promised a small reward (say $ 50), the second medium (say CZK $ 500) and the third a high reward (say $ 5 000). The first two groups turned out with similar results. The third turned out by far the worst.

The phenomenon has been described by other behavioral psychologists and demonstrated by various other experiments and studies. As a result, “if-then” rewards narrow the view and reduce creativity and performance.

The dark side of bonuses and rewards

Unfortunately, the “if – then” type of rewards often leads to various frauds, unethical behavior and, overall, very negative and diverse phenomena. E.g. in a car repair shop, sales quotas were set for employees to meet. They reacted to it by making unnecessary repairs and overpricing, to which, of course, customers reacted very negatively … Or, for example, if you remember the still current case of the Boenig 737 MAX, it’s the same song. Deadlines had to be met in order for bonuses to be paid out, so ….

But it doesn’t have to be just such scandals and cases. The important thing is that this type of reward, although effective in the short term, destroys the intrinsic motivation of creative activities. Which is exactly what we need in teams.

We need what psychologists have called DRIVE, a force that drives us to some activity. It is the inner desire to do something meaningful that we enjoy, to do it our way and to be good at it. Pink’s Motivation 3.0 is based on this. And “if-then” rewards can suffocate us.

Imagine doing some activity as a hobby. Whether you’re putting together puzzles, collecting stamps, running in the woods or going fishing. You enjoy it your way, you forget about time. You are in the FLOW state. And now someone will come to you with the idea that if you meet these and those performance goals (or other indicators), you will receive a reward. Various studies have shown that if you do, in the vast majority of cases, “the” feeling you had before would disappear. It’s not fun anymore, it’s work now. At the same time, it is still the same activity. It’s just that you’re not so free anymore, you’re narrowing your eyes to a goal set by someone else … inner pleasure and satisfaction are disappearing.

The issue is of course more complex, beyond the scope of this article, but I believe the principle is obvious (If you are interested in these topics, come to our Team leadership training, where we deal with not only Motivation 3.0 but also Management 3.0, engagement, delegation, etc.).

So what about that?

If possible, avoid “if-then” rewards. This does not mean that rewards do not make sense and should be avoided altogether – but they should not be so conditioned. In another attempt, it was found that when an unexpected reward is given, it does not disrupt internal motivation.

Or simply keep the “basic” level of remuneration, ie the salary (most often) at a reasonably high amount and focus more on the meaningfulness of the activity. The best possible application of the talents of the team member and other things that support internal motivation. It’s definitely better than pushing people to come up with ways to “arrange it” for the quarterly KPI to come out … and flood after them.